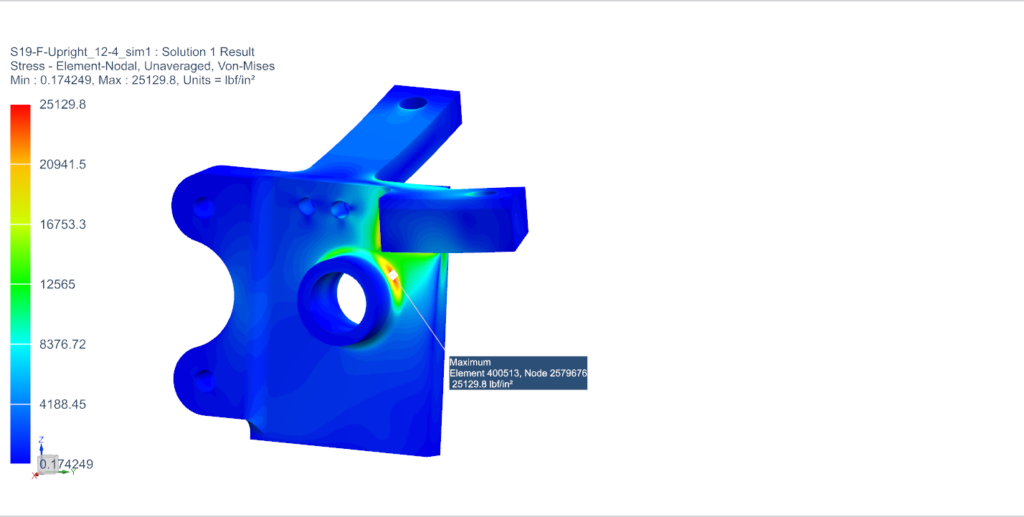 As some of you saw at Noah’s recent design review, he has been working hard to design the lightest suspension system in UR Baja history. This year we are trying to implement as much aluminum as possible. Noah’s team has been doing Finite Element Analysis (FEA) of several different components and load cases to determine where aluminum will be strong enough to withstand the beating the suspension system takes while traversing a Baja course. Noah had determined through analysis that the upper section of the A-arms can be made of aluminum, and that it’s likely that the steering links can be made of aluminum as well. By replacing heavy, steel members of the suspension system, we can save several pounds from last year’s car.

Another one of Noah’s projects that wasn’t discussed in other sections of the newsletter is the custom rear hubs. Last year, we just purchased hubs from an ATV parts website, and several judges at competition asked why we were not using our own hub designs. To be fair, they had reason to be curious since we can design significantly better hubs that weight significantly less than the beefy hubs meant for ATVs. This year, Noah’s group designed custom rear hubs that will package better with the upright, and more importantly, are much lighter than the hubs that we could’ve purchased off the shelf. We wanted to design custom front hubs this year, but unfortunately they got put on the backburner in favor of other projects. That being said, we did complete some work on them, and next year the Baja team should expect to be running a full set of custom hubs thanks to the work done by Noah’s group this year.