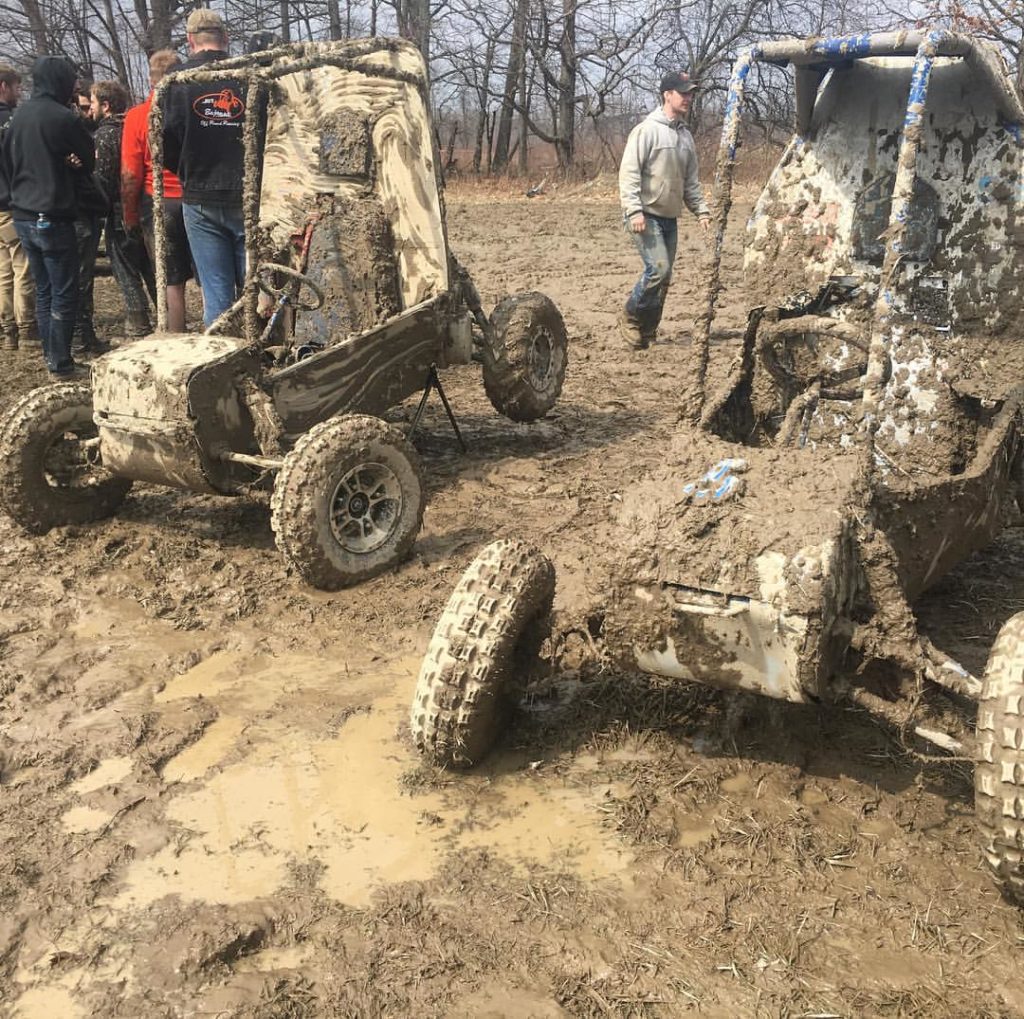 When I joined the UR Baja team earlier this year, I knew how to use a drill, and I had held a ratchet maybe once or twice before in my life. Within a few weeks, I learned how to use many of the tools our team could access and had begun work on design concepts in SolidWorks. For comparison, I will only be learning CAD software in the classroom this summer, and I don’t know anyone else who would teach me how to use an angle grinder outside of the team. It’s safe to say I’m hooked on Baja, but how did I get so addicted?

When I was at the club activities fair in the fall, I saw a car which I assumed was black underneath all the mud on it. This piqued my interests immediately; I have always had a fascination with cars, but I also saw that this was no ordinary car. When I got to their booth, I learned that students on campus receive an engine, and build the rest so it could compete in off- road racing; I wrote my name on the email list immediately.

Arguably the main reason I have stayed on the team is the amount of practical learning there is when working on a car. I have been heavily involved in the design process for this year’s new car, and I have seen how many parts need to come together for the car to roll, let alone perform well, and I’ve designed some of them myself. Working under the project team lead for suspension, I started work on reducing the weight of our rear hubs. Ultimately that design is not ready for this year’s competition, but I will most certainly be back to finish what I have started.

Even as a new member on the team, I have seen that you need communication between everyone if you want a successful car. You can’t build a car where a shock gets welded to the frame but there is no frame member to transmit the force of the car. If there is a lack of communication between the frame and suspension teams, this could very easily happen, and the results could be catastrophic. What was incredible to a novice like me was that I was still in this integrated mesh of discussion. I attended design board meetings to learn more about the car, and it has truly fascinated me to see everything coming together on time, despite the inevitable hiccups (like the new hubs breaking two weeks before competition). In addition, everyone on the team wants you to learn, they don’t want to be the only ones carrying the weight of design and assembly. This selflessness is what I think makes us an excellent team, because reaching out to the newer members like me will help to only strengthen the team in the long run, and build more connections moving forward.

Competition has been sold to me as the end goal of all the progress we make from year to year. I have only gone to Midnight Mayhem so far, which is not an official competition, instead it’s geared more towards increased freshmen participation on our team. What I do know about official competitions is that we are a top tier team. With all the work we put into the car during the year, between our design, assembly, and post-assembly testing, we are competing amongst some of the best schools in the nation. I have been promised that I will enjoy competition by numerous veterans to the team, and I would hope so. It is where being a team, a communication network where everyone knows their strengths and weaknesses, can replace a flat tire quickly then send the car right back onto the endurance track, or weld an upright back together to keep our car in the mix. This is where we can show our design prowess to the judges, justifying all the decisions we have made regarding the car, and comparing the price of our car to one already in existence. All of this and so much more excites me, and I can’t wait to go to competition in California in less than a week.

This year has been a fantastic freshman year for me, and I owe most of that to the UR Baja team. I have learned valuable career skills not because I had to, but because they were made fun and useful. Not only that, but I learned these traits from people who not too long ago were in my shoes, and now they oversee the design and production of the car. To these people, I want to say thank you for giving me the knowledge I now have, and the knowledge I will continue to absorb in my time on the team. I would truly consider this year and the ones proceeding to be the best of my life thanks to this team.