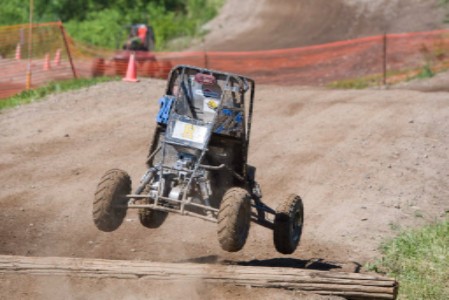 The hard work and dedication of the suspension designers of previous years resulted in an excellent system for the 2016 season. This puts me in the highly enviable position of working to improve upon the previous year’s design without having to make radical, complicated departures from what has already been designed. The refinements I currently have planned will be briefly discussed below:

The primary goal of this year’s geometry is to increase the ride height to 11 inches. In addition, the rest length of the shocks at race settings (15.2 inches) was accounted for in the design. Along with other small considerations, this goal will ensure that the  suspension adheres to the design plans. Furthermore, the new gearbox necessitated an increase in wheelbase relative to last year, resulting in slight changes to the Ackerman geometry (outboard tab moves slightly inwards towards the frame) and a slight increase in theoretical turning radius.

A new addition to the car last year, the roll-bar can greatly improve high speed maneuverability by allowing the inside rear tire to lift off the ground at lower speeds than would otherwise be possible. The previous roll-bar appeared to be too stiff and caused understeer at the Rochester maneuverability event, so this year a looser roll-bar is planned. As a test, a modified version of last year’s roll-bar was tested at Midnight Mayhem and appeared to solve the understeering issue. I would like to further test this stiffness setting before incorporating it on this year’s design but such testing has been delayed by frame repairs.

This season we will begin experimenting with new weight reduction methods by introducing aluminum tie-rods. The challenge with aluminum is not designing it to prevent failure but manufacturing it. Both tie rods will require threaded inserts and a hex piece (for ease of suspension tuning) to be welded on to the tube, which in turn necessitates heat-treating of the finished tie rod. Aluminum 6061 has a rather complicated heat treatment process, but the 7005 alloy (which has a slightly higher elastic modulus than 6061) has a heat treatment so simple, it can be done in a household oven. In future years, as we gain confidence in our ability to manufacture aluminum suspension components as well as the ability of these parts to hold up in an endurance race, more elements of the suspension might be made from 7005.

A major goal this year is to manufacture our own uprights using the Prototrak in Taylor Hall. The major obstacle is demonstrating our competence with CNC machining to the school, which is being accomplished by manufacturing replacement uprights for the 2014 car. A modified design has already been completed (reinforced upper A-arm mount, angled outboard steering mount), and a nylon prototype will be produced this coming week. For the new car, both the front and rear uprights will receive slight modifications as well, though the geometry of their mounting points (with the exception of the outboard steering mounts) will remain mostly unchanged. These modifications are intended to increase the ease of manufacturing, to ensure that both can be machined in three set-ups with no more than three tools.