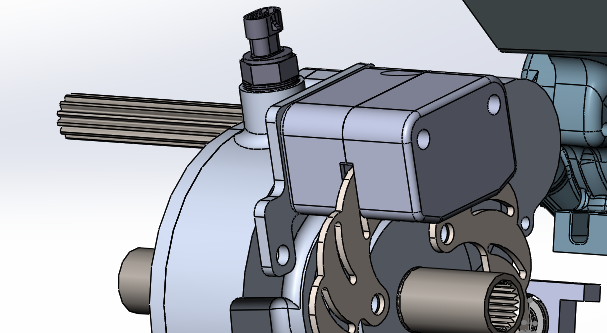 For this year’s Baja SAE competitions, the UR Baja team is aiming high: be number one! This may be a lofty aspiration for us, but we don’t just want to be top 20, or even top 10; who doesn’t want to be the best? As the current incarnation of the team grows, gathers more sponsors and resources, and strengthens its alumni network, we have much of what it takes to have the top vehicle at competition. Our competition standings are generally improving, and vehicle performance is also on an upward trend. At least on the design engineering end of things, much of what is enabling our success and improvement is design stability. After numerous cycles of iteration, many of the major vehicle components are changing little from year to year.

After the team was rekindled, the vehicles built took a myriad of forms and changed significantly from year to year. Eventually, the Water Event was dropped from competitions, allowing for major design changes since the Baja cars no longer needed to be amphibious. Over the next several years, the team tried several different rear suspension geometries—solid axle swingarm preceding trailing arm—before settling on H-arms with control links. Initially adopted in the 2015 season, we are now in our third year of the setup. Front suspension geometry has also undergone few changes over the past few years, only requiring minor adjustments due to changes in ride height and wheelbase.

But do not think this is stagnation in our engineering and innovation, not needing to spend great amounts of time designing suspension geometry from scratch has allowed us to research and pursue other areas for improvement! Last year we began experimenting with a sway-bar to help decrease the vehicle’s turning radius and generally improve maneuverability. While there were a few hiccups at first, we identified the problems have devised solutions for this year. This will be a huge benefit for the Maneuverability Event and the Endurance Race.

And although I am highlighting suspension, the other project teams have had similar experiences. We are at a point where we can focus on “the little things”: refining the designs we currently have, dropping weight from overdesigned components, finding cheaper and faster manufacturing methods, and ultimately doing more long-term research. A few projects we’re currently working on are engineering our own brake components (calipers specifically), switching to aluminum for certain tie rods and possibly control arms, and researching an injection moldable carbon-composite that Laird Plastics—a local sponsor—has given us.

Some projects—namely aluminum tie rods—are on a path to be implemented in the current year’s vehicle, while others are still years away from implementation on the vehicle. The time we have saved has enabled us to place a larger emphasis on longer-term research projects and ensure that designs are truly well-engineered before seeing use on a competition vehicle. And given our team’s current trajectory, we will continue only to rise in the rankings and be number one. Meliora.