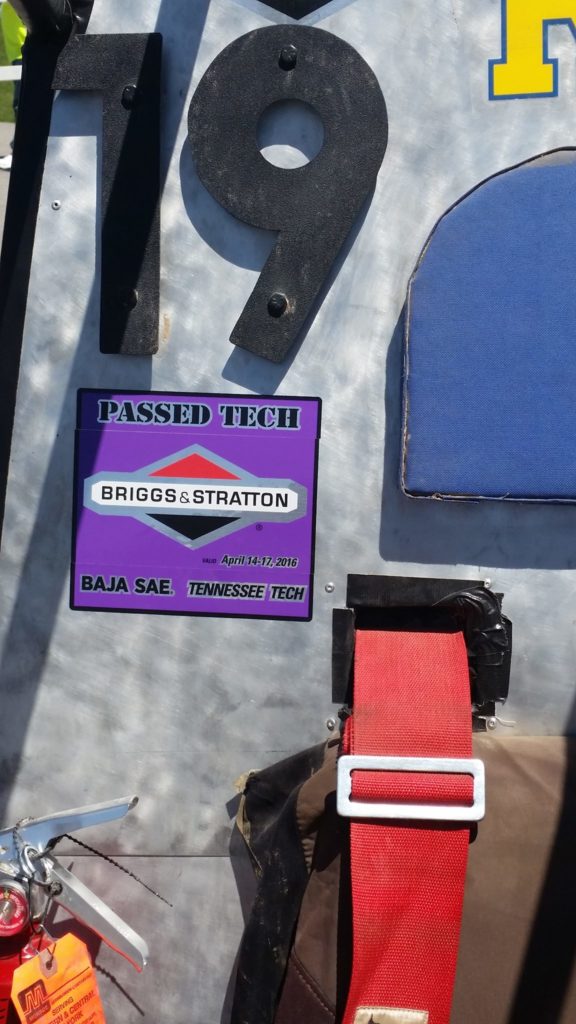 My first year on the Baja team started in January, immediately after winter break.  I had decided that I had failed to try anything new during the first semester of my freshman year and the club fair was going on, so I went out to see if there were any groups on campus I wanted to try getting involved in.  At some point someone in a racing helmet gave me a slip of paper giving the time and location of a general interest meeting for the Baja team.  A week later I was sitting in the Hopeman conference room learning about this group on campus that built weird little off-road cars and raced them.  After getting a tour of the shop I decided I was going to show up that weekend to see if there was anything I could do.  The details of my first weekend in the shop are unexciting; I had not completed my shop safety course and could only watch as other members worked on parts.  It was not much longer before I was helping machine parts.

Fast forward a few months. The car is nearing completion and I was much more involved with the team at this point.  There were so many positive experiences I had in those few months that I wanted more people to experience Baja.  I volunteered to go to a few events held for prospective students and talk about the Baja team.  Each time we would push the car across campus, or lug a box of random parts from the drivetrain cabinet to wherever the event was being held to draw attention to our table.  It will be interesting to see if those events had any success in drawing new members when I get back to campus in the fall.  I had pretty good at pitching the club to people interested in engineering those not interested in it.  The casual observer does not realize it but Baja has valuable experiences for everyone.  I also had the opportunity to hear more senior members of the team talk about the car a lot.  These events were probably the time I learned the most about how the car works besides competition.

Going to my first completion was an amazing experience. The drive to Cookeville Tennessee was longer than any I had taken and in a larger group than I had ever traveled with.  I have never experienced a more varied selection of music in one sitting.  There are so many memories I have from competition. For example, trying to get the breaks working for just long enough to pass dynamic braking despite the hours and hours of work that went into them before competition.  Or my time on carnage crew during endurance race.  Tennessee was probably one of the most memorable experiences of my freshman year. My friends are probably tired of me telling stories from that trip, but that’s fine because I aim to come back from future competitions with more stories to tell.

The competition in Rochester in June was an equally positive experience.  I remember staying up in Rettner because the team we were hosting from India was working there.  Spending time with the Indian team was a great experience.  I have always been impressed by the cars that teams put together but watching Team Helios put their car together from scratch in that short a time was just crazy.  Sitting near them during the prize ceremony where they took second in acceleration was great.  With my experiences from Cookeville and Rochester I look forward to the opportunity to attend more competitions with the team next year.

I could not have asked for a better first year on the Baja team.  Although in some ways I still feel like I missed out on part of the whole first year experience.  Since I joined the team in January I didn’t get to experience any of the work that went on during the first semester.  I didn’t get to experience Midnight Mayhem.  I am looking forward to the fall when I go back to Rochester because I honestly can’t wait to see what I missed.  Next season is going to be amazing and I cannot wait to get started on the new car.  My first experiences and memories with the Baja team have been nothing but positive and I look forward to all the ones in my future.